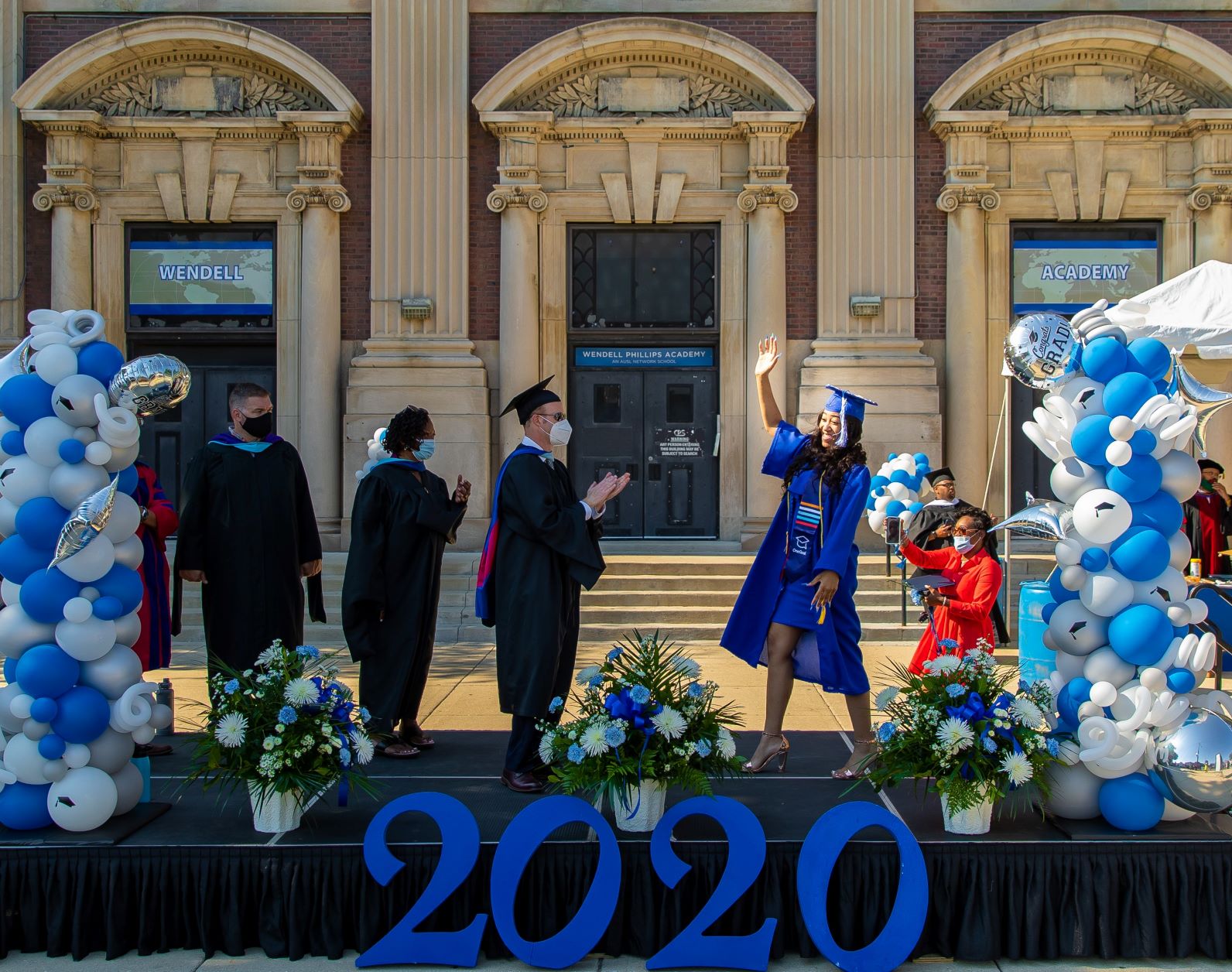 CHICAGO - Mayor Lori E. Lightfoot and Chicago Public Schools (CPS) CEO Jackson announced today that CPS students have set a new record high 5-year graduation rate of 82.5 percent (up from 80.9 in 2019 using the new methodology), which was propelled by the academic progress of Latinx students. Over the last decade, Chicago’s graduation rate has risen nearly 27 percentage points from 2010 when only 55.8 percent of CPS students earned a diploma.

“Despite the many challenges they faced, our students still managed to take another huge leap forward in their journey toward achievement and success thanks to the shared efforts of our CPS families, teachers, principals, and staff,” said Mayor Lightfoot. “This record graduation rate isn’t just a statistic, it represents a revolution in how we value education in our city, and how we support our students’ futures. Our charge now is to keep this success going as we embark on this unprecedented school year. To every CPS student and parent, I promise you this: We are not sitting this year out. No matter the obstacles ahead, we will continue our march forward until every one of Chicago’s young people finishes high school with a diploma in hand and a plan on what they’re going to do next.”

“As a district we have made incredible progress over the past decade by transforming the experiences of our high school students through strengthening our focus on programming, social-emotional support and counseling,” said CPS CEO Dr. Janice K. Jackson. “Nothing has driven this success more than the hard work of our students, counselors, educators, and school leaders. While critical work remains ahead, we are immensely proud of our students and their accomplishments as they continue to make our city proud.”

Methodology Changes to More Accurately Capture Student Achievement
In order to capture a more accurate graduation calculation, the district implemented several changes to the graduation rate based on principal feedback that eliminate duplicate students in freshman cohorts, ensure students are included in the correct cohort, allow diverse learners who remain in school after meeting graduation requirements and earning a diploma to count in a school’s graduation rate, and more. Since 2015, the district has utilized a conservative methodology that has remained relatively unchanged, and the improvements are a result of years of principal feedback that identified necessary modifications to more accurately determine the district’s graduation rate. Detailed descriptions of methodology changes can be found here.

“CPS and the Consortium have been working together to adopt a methodology for reporting graduation rates that is more consistent between the organizations,” said Jenny Nagaoka, Deputy Director of the UChicago Consortium on School Research. “These changes more effectively use the available data and provide a more accurate determination of which students should be included in the graduation rate and counted as graduates.”

The district re-calculated prior years’ graduation rate to provide an apples-to-apples comparison and, under both methodologies, a clear pattern of sustained district-wide improvement emerges. The steady improvement in graduation rates is consistent with years of Freshmen On-Track data, which serves as a predictor of graduation, and various research reports from the UChicago Consortium on School Research. A comparison of the prior methodology and the new methodology can be found below:

One Year Drop-Out Rate
This year, the district also achieved the lowest one-year dropout rate on record with a rate of 5.6 percent, which is a decrease from 6.0 percent in 2019. The one-year dropout rate measures the percent of students who drop out over the course of a given year, as opposed to the cohort dropout rate, which reflects multiple years and aligns with the annual cohort graduation rate.

As opposed to the cohort graduation rate and cohort dropout rate, which are multi-year metrics of the same group of students, one-year dropout is used to gather an understanding of how high schools are supporting students and working to prevent students from dropping out over the course of a single school year.

While the district’s one-year dropout methodology is the most accurate measurement available and the results are consistent with multi-year trends, the COVID-19 pandemic created challenges for schools on reporting this particular metric, specifically as it pertains to students who may have been disengaged during the remote learning period and students who have transferred but the school has been unable to verify due to extended school closure nationwide. In a typical year, a student who stopped attending school would have been unenrolled and considered dropped out, but it is difficult for schools to delineate between disengaged students and students who dropped out in a remote learning setting. Additionally, there was a large increase in unverified transfers, which are counted in the numerator of this metric and labeled “dropouts” even though they may be engaged at another school. The district believes that these two competing factors — delineating between disengaged students and dropouts, which potentially lead to an undercount of dropouts and an over-reporting of unverified transfers (which are considered dropouts) — ultimately offset each other. Students with whom the district lost contact with during remote learning who do not re-enroll in the fall will count against the SY21 metric.

These factors do not impact the cohort graduation rate for a variety of reasons. First, this is a measurement of data of a cohort of students over the course of five years, and it is very uncommon for an active student to drop out in the final quarter of their senior year. In order to be included in the calculation, every student had to meet rigorous graduation requirements, with the district only waiving requirements for students who have not yet met them due to certain courses or exams not being available (a full list of waived requirements can be found here).

Building on Success During Remote and Traditional in-Person Learning
In order to continue building upon the district’s progress, CPS continues to prioritize equity-centered initiatives and investments to build upon record-breaking academic improvements.

“While our graduation rate has seen remarkable growth and continues to rise, we will continue to acknowledge the opportunity gap and work to ensure our most vulnerable students receive the support they need,” said CPS Chief Education Officer LaTanya D. McDade. “This fall, we will be supporting our students through high-quality remote learning and digital resources, and we will continue to work tirelessly to ensure that every student has access to high-quality instruction and programming that prepares them for postsecondary success.”

Critical Initiatives to Support Learning in All Settings:

This year marks the highest graduation rate on record, but due to declining enrollment, a slightly smaller number of cohort graduates earned diplomas this year than last year: